The training files can be downloaded here. 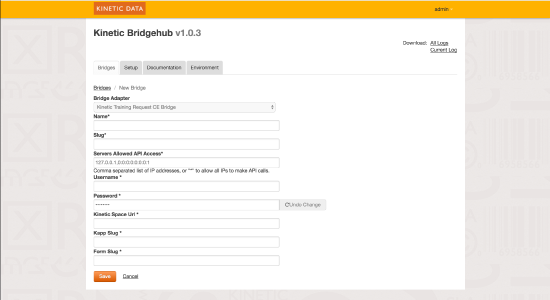 When creating a new bridge instance for an adapter in Bridgehub, you will be presented with a list of properties that need to be configured before the bridge can be successfully created. Name, Slug, and Servers Allowed API Address are default and required properties for every bridge and therefore cannot be controlled or changed by an Adapter author. Any properties that follow after that (ie. Username, Password, Kinetic Space Url, Kapp Slug, and Form Slug in the screenshot) are Adapter specific and can be added/modified by the Adapter author. 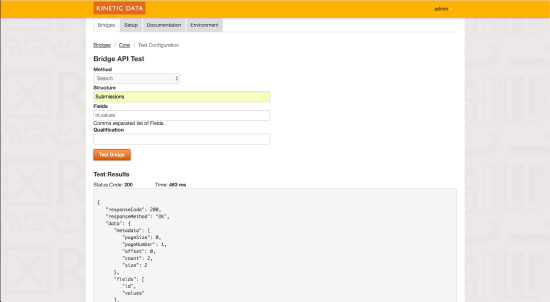 Each bridge instance that has been previously created has its own API Test page, which can be used to quickly test and debug problems in a bridge. On the test page you just need to select a method (count,retrieve,search), a structure, some fields, and a query and the console will generate the API request and return the response. 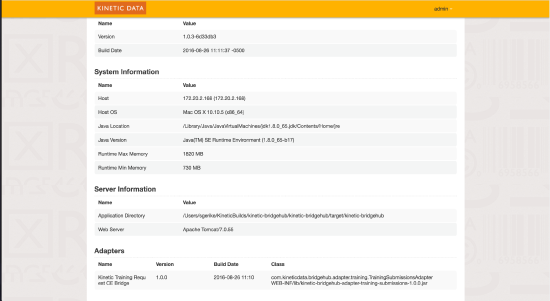 If you ever need/want to see a list of all the currently installed adapters, navigate to the Environment tab where there is a list of currently installed adapters at the bottom of the page. Along with the name of the adapters, that list contains information about each adater such as the Version, Build Date, along with the adapter class and .jar location.

Components of a Bridgehub Adapter 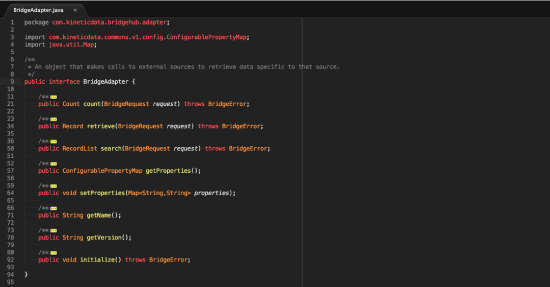 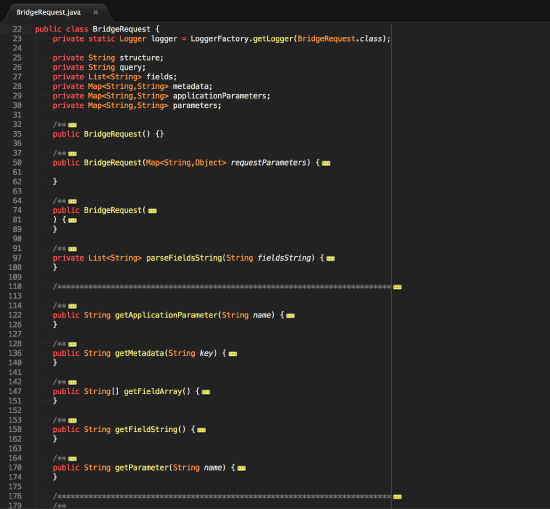 The qualification parser is a class created to help parse and encode parameters for bridge qualifications. The only method that is required to be implemented in the Qualification Parser is the abstract method encodeParameter. The method is passed a name and value for a parameter and the method needs to know how to encode it so that the parameter value conforms to the standards of the data source before it is attempted to be sent as a part of the query. The most common place where this is used is for data sources that use XML and the encodeParameter method is used to escape reserved XML characters so the adapter doesn't send malformed XML to the data source.

Located at src/main/resource/META-INF/adapters needs to be a file named com.kineticdata.bridgehub.adapter.BridgeAdapter that contains the class for your main adapter file. Bridgehub searches through all .jars in WEB-INF/lib for any that have the discovery file and then attempts to load up the Bridge Adapter if the discovery file was found. 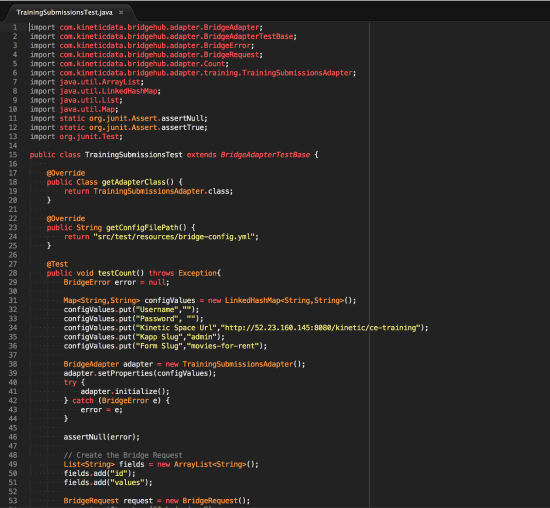 A JUnit test file can be included to allow testing an adapters functionality without loading it into Bridgehub. This isn't required, but it allows you to test situations that you have a static set of inputs and expected outputs much more quickly than manually tesing in Bridgehub (ie. Testing that bad inputs lead to the correct errors). 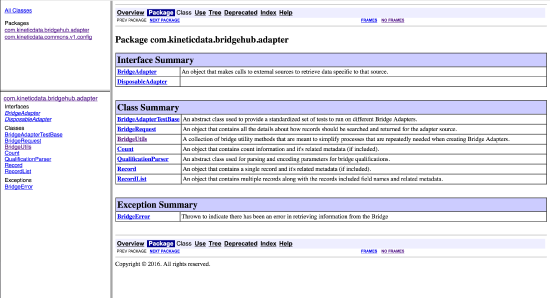 If you want more specific information about methods available to you when creating a bridge adapter, download the kinetic-bridgehub-adapter.jar JavaDoc and explore for yourself. To view the JavaDoc after downloading, unzip the folder and open up index.html in your browser of choice.

How to Build Bridgehub Adapters (including an introduction to Maven)

The Bridgehub console and Bridgehub adapters are currently targeting Java 6.

mvn test is the command line command to run any tests associated with your project. The output for the command will tell you which of your tests passed/failed. It also shows you where to go to get more specific information on why your tests failed (if any of them did)

How to add an item to a map map.put(key,value);

The <String> tells Java what type of object is allowed to be passed into the collection. For Maps, you can pass an object type for both the key and value like this:

Similar to the List, this tells us that all keys need to be strings, but the value is allowed to be any Java object.

@Override is an annotation that is used to denote that the current class is overriding a method that existed in the class that is currently being extended or inherited (if you want to know more about inheritance, you can read about it here). All Bridgehub adapters inherit from the abstract class BridgeAdapter, so properly implement the class you need to @Override all the abstract methods that are defined in BridgeAdapter (as detailed earlier).

How to add a new configuration property Step 1: Add the property variable and display name to the static Properties class

Step 1: Get the size of the JSONArray that was returned from the data source

Step 2: Create a new Count object using the retrieved size and return it

Step 2: Run mvn test to see if the test successfully passes. If you see BUILD SUCCESS you have successfully implemented the count method!

Step 1: Copy the code for retrieving the source data from the count method. All the code under the following comment headers should be the same between the methods:

Step 2: Iterate through the submission list and make a new Record for each submission JSONObject

Step 3: Return a new RecordList object (The order of the parameters that need to be passed to RecordList are fields, records, then metadata)

Step 3: Copy the created .jar from /target to kinetic-bridgehub/WEB-INF/lib

Step 5: Create a new instance of the bridge in Bridgehub

Step 6: Navigate to the Test page for the bridge

Step 7: Test the search method with the following inputs:

Step 1: Using the Kinetic Core REST documentation, build up a url to retrieve a submission that matches a single submission id

Step 2: Similar to the Search method, copy the code for retrieving the source data from the count or search method.

Step 3: Create a record object from the returned submission object.

Step 1: Review the escapeQuery() method provided at the bottom of the file

Step 2: Find any places where a query is being added to a url. Then run the query through the escapeQuery() method before adding it to the url.

Test a bridge using the Test Bridge Adapter Base file

Step 4: Find the bridge-config.yml file and add your username,password, and Kinetic Space Url to the Bridge Configuration section

Step 6: Run mvn test. Even if you successfully implemented the retrieve method, 2 of the retrieve methods are still going to be failing. So you will get a BUILD FAILURE method either way (don't worry, this will be fixed in the next activity!).

Implement using parameters for each method

Step 1: Parse the query and exchange out any parameters with their parameter values (add the following code chunk under the corresponding comment in the count, retrieve, and search methods).

Step 2: Replace any places whererequest.getQuery() is used with the generated query variable.

Step 1: Move the code used to retrieve a JSONArray of submissions into a helper method.

Step 2: If there is no submission id provided in the query, send the query into the helper method to return matching submissions.

Step 3: If there is more than one submission that matches the query, throw an error. If there is a single record, use that to populate the submission object and create a Record.

Step 4: Re-test the adapter against the TestBridgeAdapterBase. Adding in the ability to retrieve a record using a query should fix the errors that were happening with the retrieve tests!