With the adding of Kinetic Task functions into the main console and the introduction of new terminology, the left navigation has changed.

One of the biggest changes for Kinetic administrators in Platform V5 is there is no longer a separate Kinetic Task interface. Kinetic Task is now more native to the platform, and all existing functionality now resides in various areas of the main console.

Starting with Platform V5, only one task environment is configured for a given Space. As before, the Task environment can be made up of multiple Task servers in various configurations. The connected Task environment is identified in the Settings > Platform Components area. Previously, the strategy was to use custom space attributes to make the URL dynamic, or hardcoded URLs within Webhooks. This results in a simpler webhook definition strategy as well (see later section).

You’ll find Trees, Routines, Runs, Triggers, and Errors under Global Workflow in the console. Handler and Task Source configuration are under Plugins. Policy rules, Categories, License, and the ability to stop / start the engine are under Space > Settings > Workflow.

Platform V5 introduces the Kinetic Agent. One capability of this agent is to function as a combination and replacement for the previously separate Kinetic-Bridgehub and Kinetic-Filehub components. The platform console integrates with the Agent, allowing space administrators to define bridge end-points directly without the need to access the Agent Console directly.

Another advancement is that Kinetic Agent lets you run individual task handlers. This is part of the integration strategy for integrating cloud-hosted environments with on-prem systems. Handlers within a locally-installed agent can integrate with on-prem systems without having to open up firewall ports for each integrated system. A new handler has been written allowing workflow to call the Agent and execute a specified handler.

A space may connect to multiple Agents as needed. Cloud-hosted environments that will integrate with on-prem applications will typically use multiple agents, one would be part of the cloud environment (providing file handling and bridges to the cloud system), and the other would be installed locally.

See this article for additional information on the Kinetic Agent. 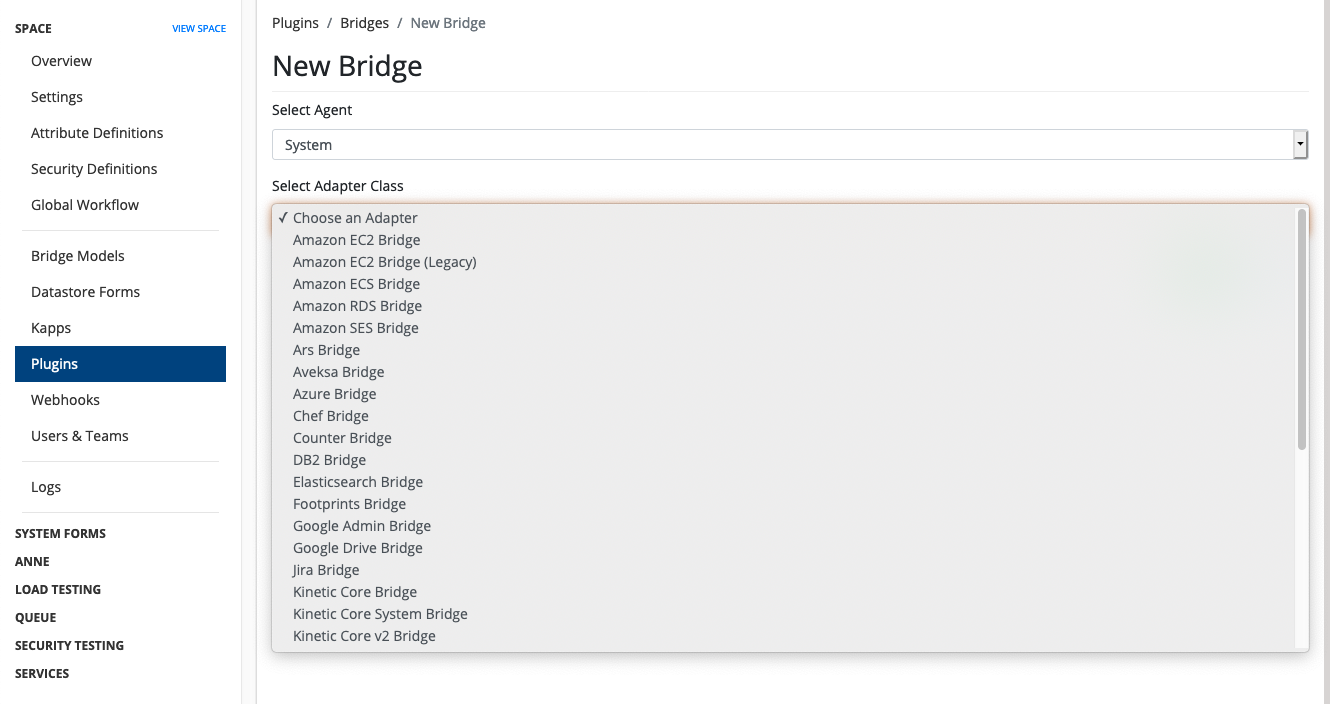 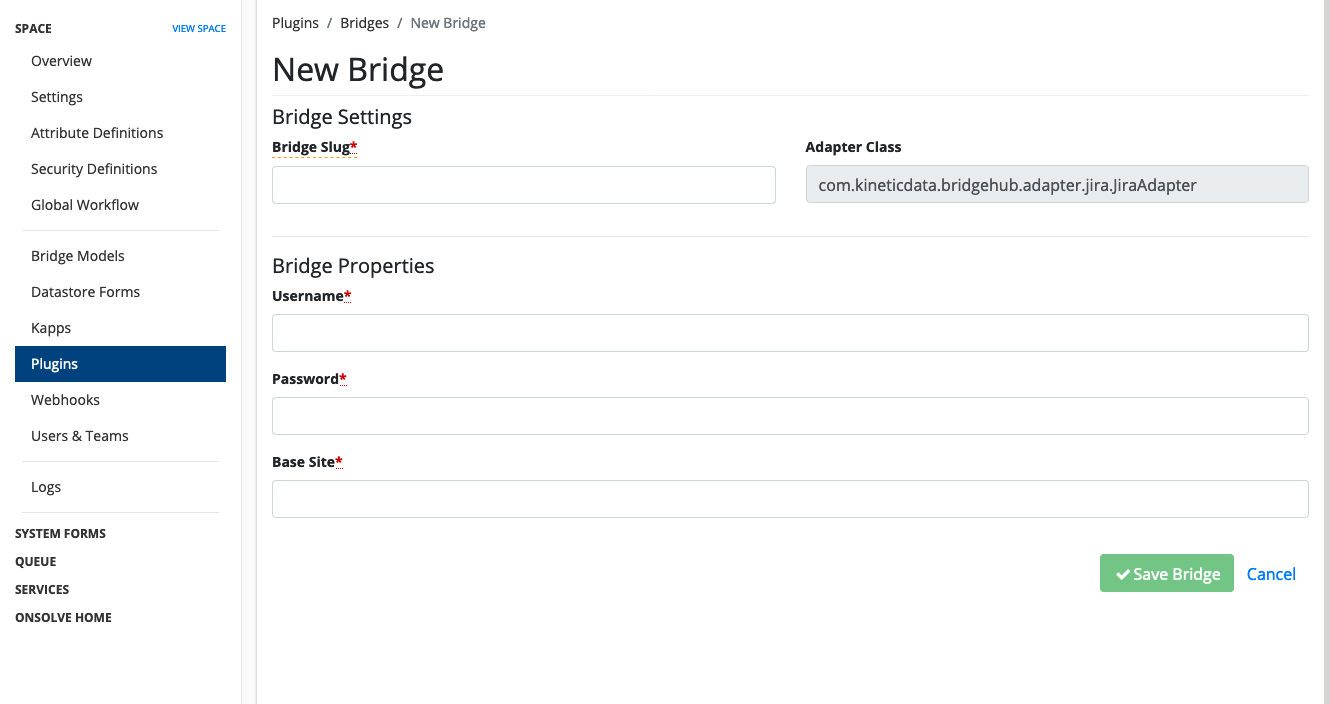 Example of configuring a handler installed on an Agent

The Bridge strategy has been simplified in Platform V5. Previously the steps to define a Bridge Model were separate from a Bridge Mapping. With the new release, these steps are collapsed to make defining bridges more intuitive. Bridge Attributes are defined and mapped in the same step; Bridge Qualifications are named and defined in one step -- along with any dynamic parameters.

Additionally, a new Testing capability has been introduced allowing administrators to test bridges direct from the console.

Because of the new tighter integration with Kinetic Task, webhooks no longer include references to a Task server. Instead, they reference a Core API endpoint which directs the activity to the integrated Task system. The API parameters still include the Source, Group, and Tree Name.

For all kinops customers and customers with On-Prem installations using Kubernetes, Logs now includes logs across all platform components, across all servers -- including Core, Task, and Agent. In addition to downloading the logs, the display lets you set various timeframes, apply various filters, and return specific attributes. 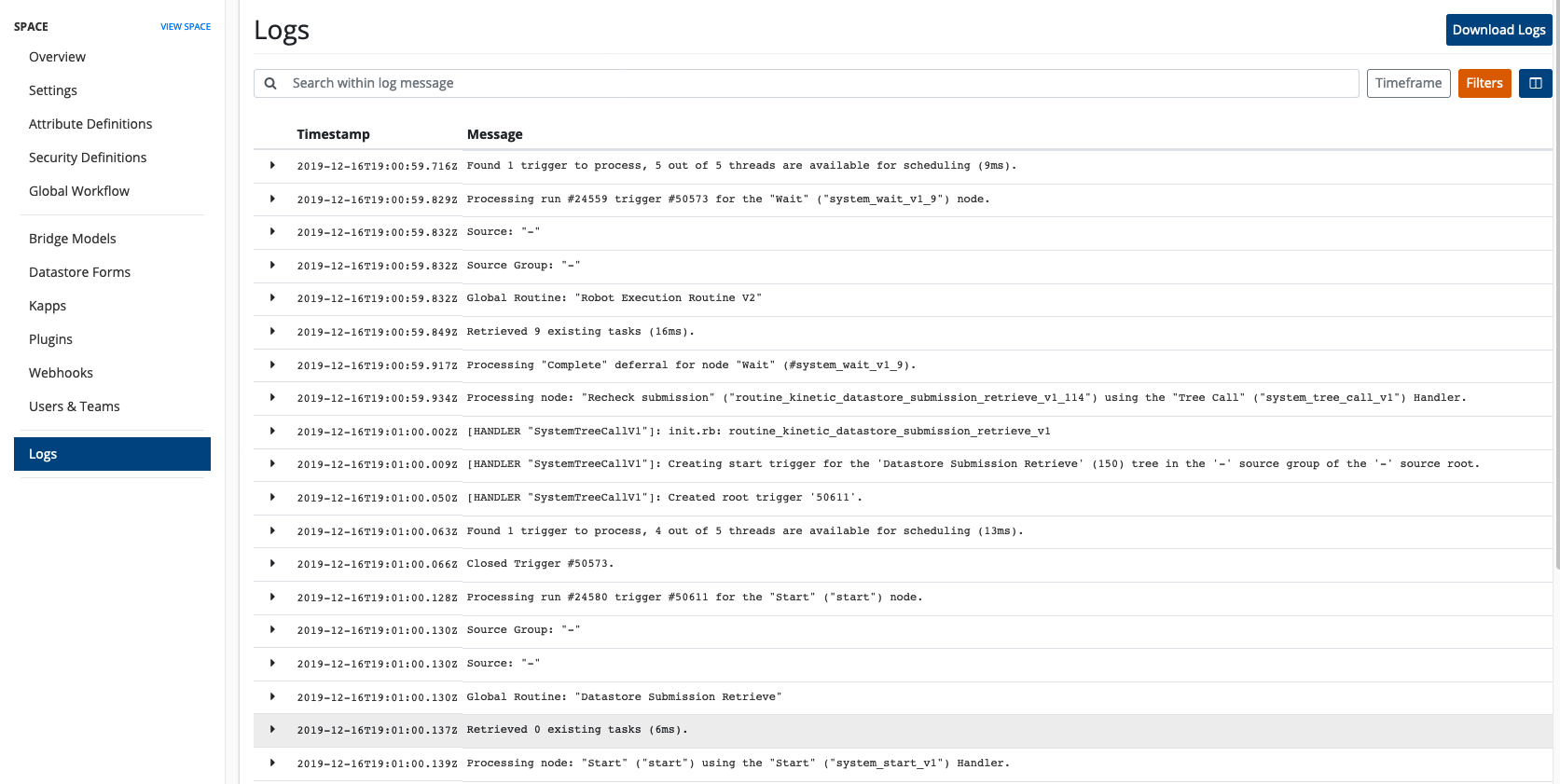 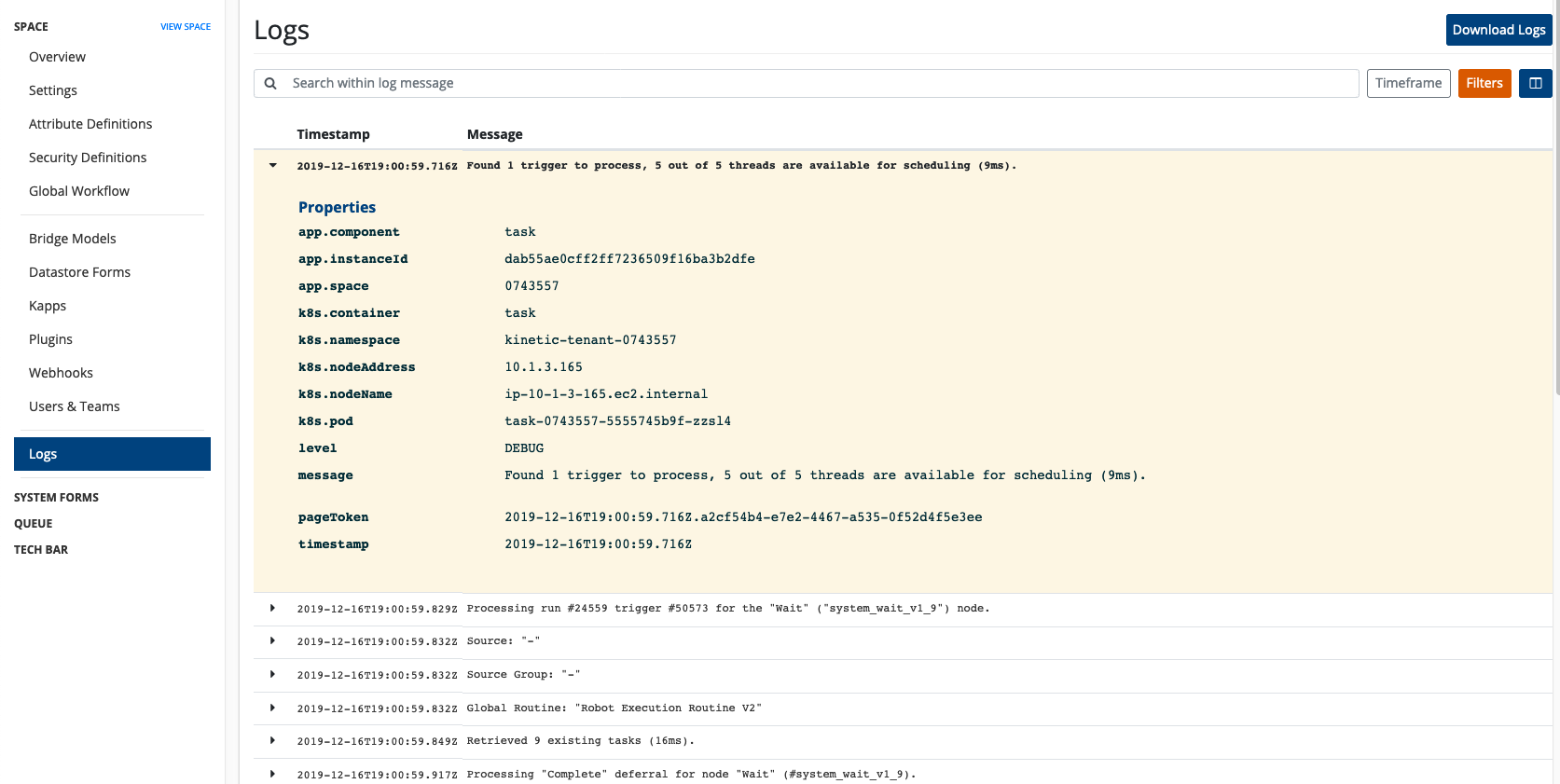 For cloud-hosted (kinops) customers, the Task Handler API locations are automatically updated to the following:

For on-prem customers, coordinate handler updates with your implementation. The URL may be slightly different based on local configurations.

For other integrations to third party systems, coordinate those updates during your implementation. Usually, the URLs to use match one of the scenarios above.

All areas in the console where parameter values can be used now use a code editor style field. This field offers syntax highlighting as well as providing quick access to the possible parameters.

A couple of changes in the Platform V5 implementation necessitate Bundle updates.

For customers in the cloud-hosted (kinops) environment, these changes have been made for you.