There are cases where you may want to control a bridge action in greater detail than setting fields, filling in field defaults, or leveraging DataViewer library to build tables. For example, you may need to chain several bridge calls together to get to your final result. Or perhaps you need to do special processing on the result once it comes back. This requires you to use javascript to work with the bridges.

The first step is the same as any other use of a bridge. You still need to create a Bridged Resource on the form (as described in Building a Form). Once that resource is created on the form, you can access it with a load method that takes an options object as an argument. This object has the following properties:

In addition to the load method you can call these other methods:

As with any use of bridges, you have to set up a model with qualifications and attributes. In this case, we are using a model that is mapped to the user object in the Kinetic Platform. 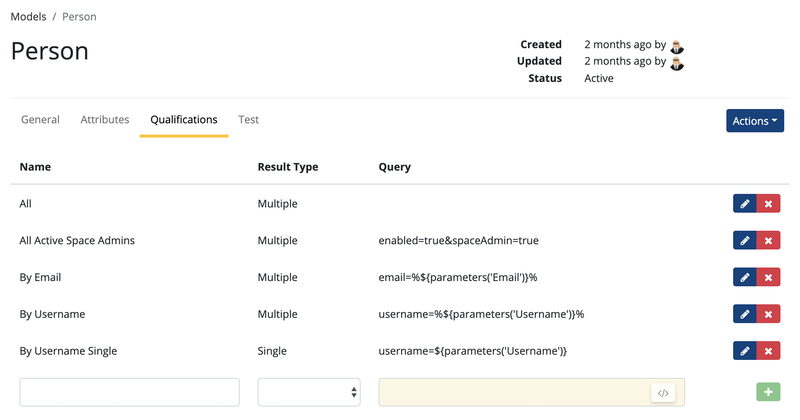 Then the bridge resource needs to be set up in the service item.

And in this case, the bridge is being used within an on-load event: 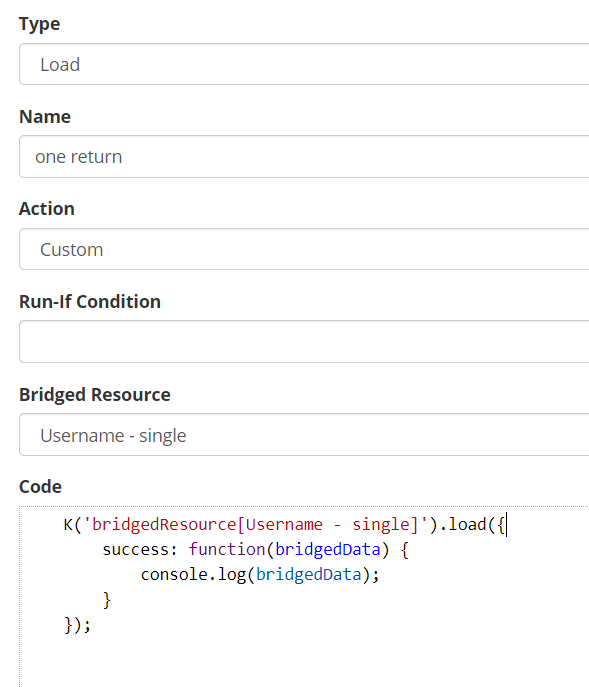 All this particular example does is log the result into the browser's console. It doesn't specify any attributes or parameters. The parameter is taken care of by the bridged resource and all of the attributes will be returned.

Note: It is also more likely that a single result type query will lead to an error on no match rather than an empty string. This will depend on the system being searched and they query being used, but it is something to be cautious of.

The most common way to work with these bridge results, is to parse them as JSON and work with the JSON objects/arrays.

Bridge calls are asynchronous. This means that if you want to be sure that one bridge call is happening upon return on another, you need to chain them together. This can be done in a couple of ways. First, you can use the first bridge call to populate/change a field with the data needed for the second bridge call, which would run on change of that field. This is the cleanest and most direct way. You can also, if that doesn't fit the scenario for some reason, embed one bridge call within the success function of the other.

Questions/Comments?
Next (Basics of Workflow Integrations) >